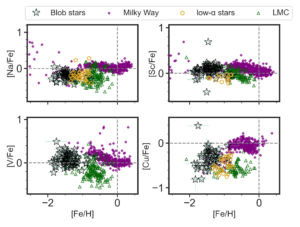 The hierarchical model of galaxy formation predicts the streams and tails of disrupted satellites that we see in observations and simulations. These are signatures of small galaxies being eaten by a bigger galaxy (ours truly) but these only show the current interactions of these systems. For the galaxies that have been fully disrupted and incorporated in the Milky Way though, we are still able to separate them out using chemistry and kinematics!

I have PI-ed observations at the McDonald Observatory to look at such cannibalized stars from the Gaia-Enceladus/Gaia-Sausage/blob (GES) system to perform detailed chemical abundance analysis and ultimately to answer the following questions: How does this system compare to the satellite population of the Milky Way, both disrupted and undisrupted? What can its chemistry tell us about its star formation history and chemical evolution?

Here’s a link to the culmination of this work where I derived abundances in the alpha, light, odd-Z, iron-peak, and neutron-capture elements for GES stars!

Link to catalog used in the paper: zenodo

Link to the paper: arXiv 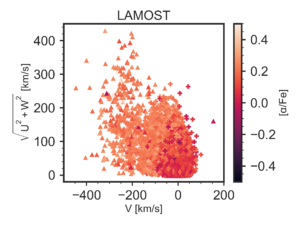 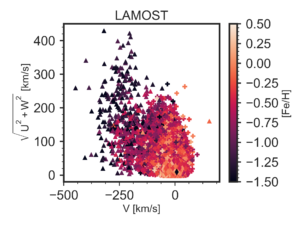 With the advent of the Transiting Exoplanet Survey Satellite, we will be able to find thousands of exoplanets around stars of different chemistry, kinematics, and location in the Milky Way. As the same gas that forms stars forms the planets around them, it is important to understand how planet properties relate to stellar properties. In a recently accepted paper, I investigated the Galactic context of planet populations and formation by combining astrometric, spectroscopic, and photometric surveys (i.e. Gaia DR2, APOGEE, GALAH, RAVE, LAMOST, Skymapper) to understand the chemo-kinematics of possible planet-hosting stars. We find that most TESS targets are in the thin disk (>90%), but they are also found in the thick disk (4%) and the halo (<1%). We then used these kinematic memberships and looked at the metallicity and alpha-enhancement in the different Galactic components from the variety of surveys we utilized for the study. We find that each survey shows decreasing metallicity and increasing alpha-enhancement as one goes from the thin disk to the halo. We hope this catalog (linked above!) will be useful to explore planet populations as a function of kinematics, component-membership, metallicity, and alpha content.

Answer: we use spatially-resolved data from integral field spectroscopy (IFS/IFU for short)! With IFU data, we are able to observe the spectra of a galaxy in different regions and figure out what combination of stellar populations give rise to the observed integrated light. In a recently submitted paper, I derived the stellar population ages and metallicities of the galaxy NGC 2903 using the VENGA IFU survey in its different parts: the bulge, the bar, and the disk. I calculated the mass build up in each of the different galaxy component and find that (1) most of the bulge mass has formed at earlier times compared to the bar and the disk and that (2) the bar and the disk have similar mass build up histories, pointing to the scenario that the bar is formed from disk material.

Dwarf galaxies outside the Local Group

Link to the paper: arXiv

For the undergrad paper I led under the mentorship of Eric Bell, I characterized the dwarf galaxy dw1335-29 using VLT VIMOS images and HST photometry from the Galaxy Halos, Outer Disks, Substructure, Thick Disks, and Star Clusters survey (GHOSTS). I used the tip of the red giant branch method to confirm the dwarf galaxy’s membership to the M83 group. It’s a peculiarly star-forming and non-tidally disrupted galaxy at a 26 kpc projected distance to its host. This is weird compared to the Milky Way satellite population which is mostly quiescent for those within 100 kpc (barring the Magellanic Clouds) and has dwarf galaxies disrupted and spread across the stellar halo at distances of 30 kpc like Sagittarius.